I Don’t Get It – Where’s the Gas Fracking Benefit for Consumers?

Posted on April 4, 2012 by jstephencleghorn

Here’s the thing – the gas companies PR machine constantly sells the idea that new, abundant sources of natural gas from hydraulic fracturing of tight shale formation (like the Marcellus) is driving prices down, thus is a boon to consumers.  In addition, the likes of John Hanger (former Secretary of Pennsylvania’s Department of Environmental Protection) and John Quigley (former Secretary of Pennsylvania’s Department of Conservation and Natural Resources) have been touting the environmental and public health advantages of burning natural gas versus burning coal to make electricity.  They do not speak about price to consumers, ’tis true, but one would hope that using “cheaper” natural gas would result in Americans and Pennsylvanians paying less for their electricity.  No one – Hanger or Quigley included – is arguing to consumers that they should pay more for electricity generated by natural gas versus that which comes from burning coal, just because it may be friendlier to the environment at the point of combusting it.

Leaving aside that Hanger and Quigley have yet to apologize for allowing fracking to get its death grip on Pennsylvania while on their watch, let’s just look at the issue of whether this new form of extreme energy extraction can be justified on the end cost to consumers (selfish as that is, ignoring as it does the global warming impacts of opening up a whole new front of fossil fuel consumption).

So I became curious as to whether all this risky fracking business (a drilling process so violent that well casings fail 6% of the time, according to stats on file, meaning that in a given year Pennsylvanians can expect over 200 wells to explode their toxic contents into the surrounding crevices and cracks below ground, and into their aquifers) has at least the benefit of lowering the costs for natural gas to consumers, whether for the gas we consume in our homes or the electricity we use with more natural gas in the mix of energy making that electricity.

So I went to the United States government’s Energy Information Administration (EIA) to see what I could see.  Here is what I saw for the years when natural gas has increased its market share as part of America’s and Pennsylvania’s energy portfolio.

Have United States and Pennsylvania consumers seen a lower price for their natural gas? Not according to this EIA chart. Natural gas costs more to consumers in 2012 than it did in 1982.  During the big bump in shale gas extraction (since 2000) the price in 2012 is greater that it was in 2000.  Now maybe this and the following charts don’t account for inflation (I don’t know), but still one wonders why natural gas prices for consumers across the United States are now higher than the price in 2000.

The same deal applies for Pennsylvania consumers of natural gas:

So has all this new natural gas available from dangerous fracking made much of a difference in what it costs electric utilities to generate power from gas? Hard to see from this chart. Looks like the price is just now getting back to what it was in 2000 and may even be a little higher. 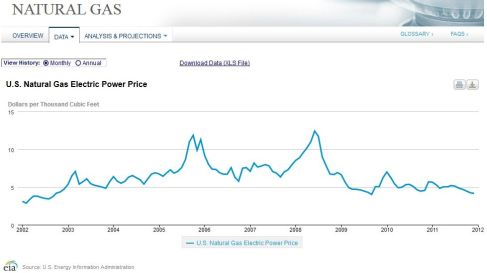 Same deal for the price of natural gas used by Pennsylvania power plants to make electricity – about the same in 2012 as it was in 2002, perhaps a little higher.

So then I looked at some major data on what consumers have been paying for electricity over the past decade or more. Up, up, up it looks like to me whether for the United States or for Pennsylvania. (These charts I did based on EIA data points.)

Costs of electricity for residential consumers across the United States since 1998.

Costs of residential electricity for Pennsylvania consumers since 2000. 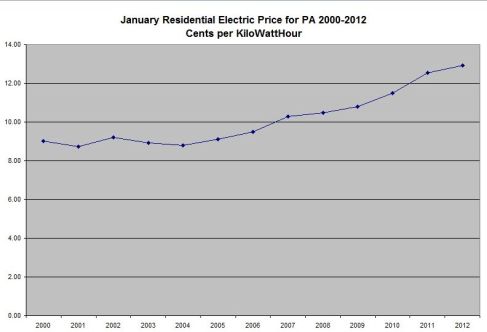 So as I said, I don’t get it.  If a brand spanking new form of fossil fuel extraction for natural gas in tight shale formations is giving us cheaper energy, how come we cannot see that in the EIA data?

I’m just a simple organic farmer from western Pennsylvania (OK, so I did get a PhD in Sociology where I learned a little about using numbers), but none of this adds up for me.  If someone out there has definitive data that says that the increase in natural gas production over the past decade via fracking has driven down the cost to consumers for their natural gas or to electric utilities, then let’s see it.  Are we paying less for electricity since the “cheaper” natural gas has increased its presence in our basket of fossil fuels?  Not, it appears to me.

My name is Dr. J. Stephen Cleghorn. I am now a resident of Baltimore, MD. I continue to own a 50-acre certified organic farm in Jefferson County, PA that I operated with my late wife Lucinda between 2005 and 2011 when she passed away from cancer. The farm is now under lease to organic farmers and protected by "The Dr. Lucinda Hart-Gonzalez Conservation Easement” which protects it for organic agriculture and against the threats of industrial development that would violate the Rights of Nature. The blog’s name is taken from the writings of Saint Augustine who believed “Hope” to be the greatest of spiritual gifts. And, says Saint Augustine, Hope has two lovely daughters: Anger and Courage. Anger so that what must not be may not be; courage so that what should be can be. Anger and Courage. Now in late 2016, after the election of Donald Trump as President of the United States, these are the spiritual gifts that must come to the fore if we are to have “Hope” for a loving culture and a sustainable world for future generations. When I first created this blog it was focused on the extreme form of fossil fuel extraction known as “fracking” that was threatening much of the state of Pennsylvania and many other parts of the United States. At the root of that struggle was and is a struggle to halt and reverse climate change. Now the struggle has turned to resisting an incoming Trump Administration that is an existential threat to the climate with its plans to ramp up extraction and use of fossil fuels. This blog will be about having the courage to stand up to the massive global corporations that would ruin our planet and its climate, take their profits and leave the mess to future generations of to clean up. We need to rise up, my friends, and be not afraid.
View all posts by jstephencleghorn →
This entry was posted in Uncategorized. Bookmark the permalink.